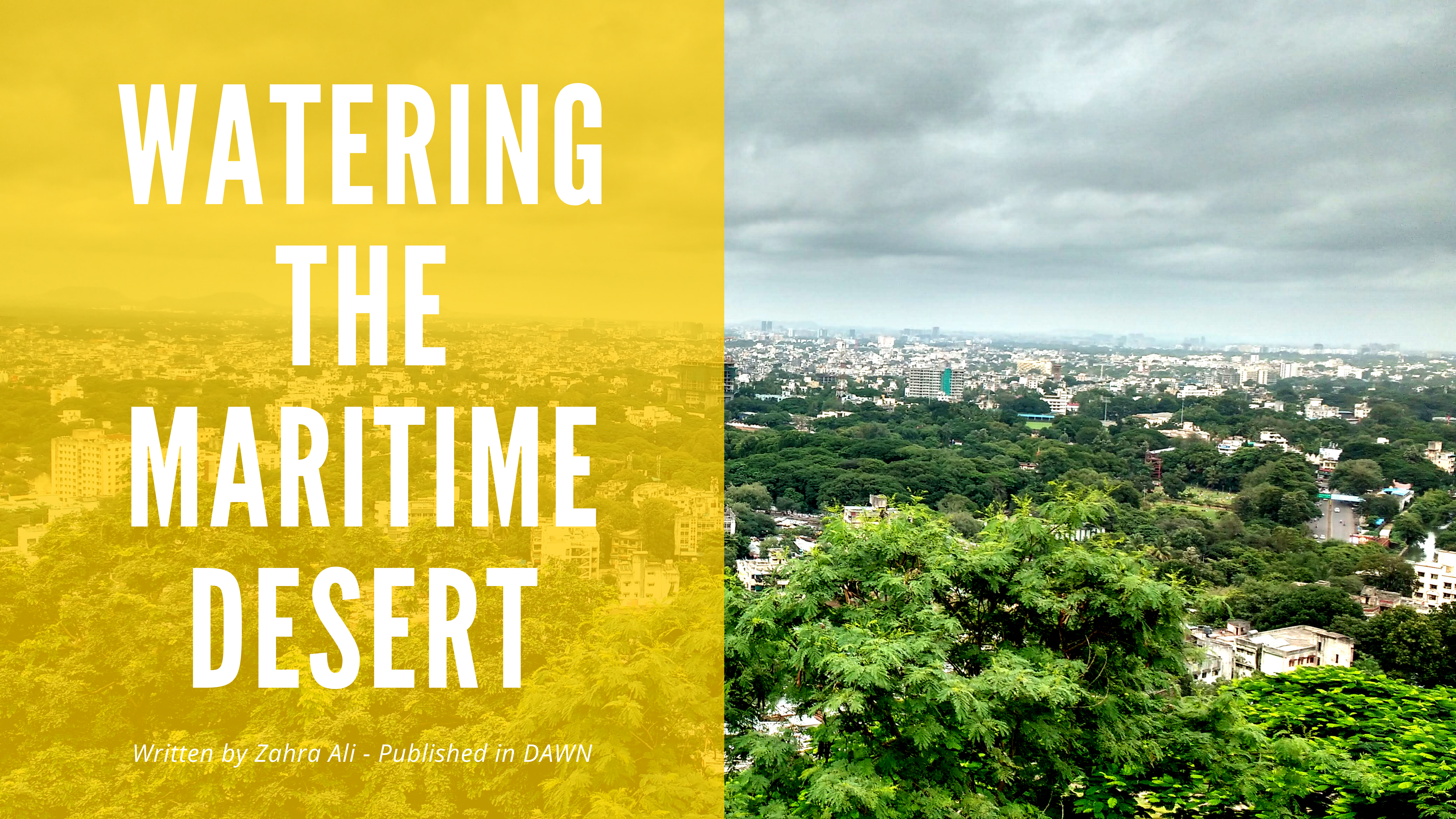 With its extreme heat and drought-like conditions, Karachi has begun to raise an alarm: this is what global warming looks like and it now knocks on our doorstep.

“Karachi has been recognised as a maritime desert,” explains Rafiul Haq, an ecologist by profession and founder member of Coastal Restoration Alliance for Biodiversity (CARB). “It is located in a subtropical arid zone with an average rainfall of less than 220 mm/year. Such fragile climatic conditions are sensitive to any change.”

Extreme weather conditions are linked to global climate change, which is a result of unnecessarily exhausting natural resources. In a city of about 20 million, the endless use of air conditioners, excessive travelling and even eating meat more than we need, is all adding up to a bigger carbon footprint.

“The settled residential areas are now surrounded by high-rise buildings, which contribute to municipal, social and ethical issues. Recent unplanned and uncontrolled development has greatly ignored the fragile nature of the city’s climate,” argues Haq.

Is there a way to reverse the process?

The consensus among environmentalists is to plant more trees, and then some more. It seems like an obvious and sensible thing to do, but not many heed the lesson.

“Trees play a vital role in moderating the micro climate,” explains Haq. “Besides being good absorbents of radiant energy, producing oxygen and maintaining temperature through perspiration, they definitely contribute in increasing the chances of rain.”

“Peepal, burr and banyan are the best trees as far as the ecology of Karachi is concerned. They are home to hundreds of birds who live among its branches and feed on its fruits,” contends Walid Ansari, an advocate by profession, who also runs tree plantation drives across Pakistan though his NGO, Global Green.

If the last good time to plant a tree was 20 years ago, the next is now!

“Banyan trees are one of the reasons for rainfall all over India. There used to be many such trees all over Karachi and even in Sindh and eastern Baluchistan, but sadly people replaced them with ornamental trees that were smaller and could easily fit into smaller homes,” he explains.

Haq agrees with this viewpoint: “If you compare the current status of diversity with the recent past, you will notice that we have lost a number of life forms from our surroundings. The disappearance of butterflies, many bees, wasps, etc. are clear indicators of diversity loss or compromise.”

According to the veteran ecologists, the introduction of alien species like Conocarpus and earlier Eucalyptus has probably contributed significantly in lowering diversity since these species interfere with the local climate.

“Karachi falls under the Saharo Sindian region, with has a low diversity index. But cities such as Karachi can overcome this harshness as it has access to the facilities required to enhance diversity,” says Haq.

Besides beautifying the city and purifying the air for us, trees also absorb carbon. In the presence of water and sunlight, they produce oxygen and perspire excess water through their leaves to regulate the surrounding.

Evaporation takes away some of the heat from the nearby environment. The larger the leaf, the more water it evaporates! This leads to the reduction in air temperature by several degrees. Were you to seek refuge in the colonnade of a neem tree, temperatures can be as low as 36F as compared to an open area.

“Come to the Sindh High Court building a little before sunset,” says Ansari, “and experience the magnificent specimen of a banyan tree that houses hundreds of crows and minas that make a bee line for the tree from the other end of the main building, swooping into the branches to their per-determined abodes.”

Meanwhile, Haq urges patience and consistency as essential for any successful tree plantation drive. “When you plant a tree do not expect a canopy the next day; it takes consistent dedicated work in association with technical guidance by experts, societies and groups engaged in the task,” he says. “The campaign can take three to five years to show results. If we target to turn at least 25-35 per cent of this city green, it would be a major achievement.”

A word of caution too: do not promote monoculture, plant a variety of trees, and always prefer local species.

A systematic maintenance of diversity can bring more desirable results since a specie is less likely to contract a disease that another is suffering from.

What to plant where?

It’s best to plant local fruiting, flowering and shady trees depending on the location. Here are some ideas:

Near the beach: Different trees resist different levels of salinity; however, coconut is one tested tree that grows well near the sea. Mangroves growing by the coastal belt are our treasure which is being lost. You can help organizations replant mangrove forests.

Outside buildings: The biggest hurdle while selecting trees to be planted outside a building is the web of wires hanging from one pole to the other.

For places facing this problem, trees with short height but bigger canopy are ideal.

Lignum tree, which is not local but acclimatized to our climate and is non-invasive, looks beautiful and is easily available.

By the roadside: Plant Neem trees to add shade for the people and to purify the air.

On a rooftop: Plant chiku, shareefa and lemon in large pots on a roof top for added advantage of eating fresh fruits!

If you are growing trees in or around your house, Haq recommends the following for beginners:

Flowering trees: Amaltas, Gol Mohar, Lignum though not local it has acclimatised.

Different areas of Karachi have different types of soil; knowing their variation is key in avoiding any failures. Rafiul Haq classes them according to administrative districts:

South: The soil is waterlogged and at places saline. This includes areas like DHA and Clifton; however, this part has significant amount of greenery.

West: This district has a mix of waterlogged and saline soil with a patch of productive land near Garden area. The industrial area has some road side greenery which is lacking in general. The residential areas are very thickly populated and do not enjoy much of this luxury.

Central: This district is worst affected by so called development. It has productive soil, with a belt of calcareous origin in its northern end. Majority of its green belt was removed, besides a numbers of known public parks been encroached upon rather removed, depriving the residents of their oxygen source.

Tips to grow a tree

It is best to buy a young tree from a nursery and save a few years of work. These trees are available at almost all nurseries and are not costly.

“Date and neem trees are the easiest to grow,” recommends Walid Ansari. “The seed should be placed about an inch below the soil, or in some cases just below the surface after the surface has been dug well and made loose.”

Ansari suggests digging a two by two feet deep hole for planting saplings into the ground. Soil must be loose which will make it easy for the young roots to find water and grow strong.

New soil with added compost can be used to improve the old soil if needed. Young trees will need protection from animals and shelter from strong winds. Regular watering will also be needed until they are big enough to manage on their own.

Young Founder of Kids Who Farm

Sow, you want to grow?

Who is Hussain (a)

There is nothing more satisfying than waking up in the morning, walking into your garden, stroking a green leaf, smelling a delicate flower, and listening to the early morning bird songs.Zahra Ali